The humans are dead, part 4 and final

The humans are dead, part 4 and final

Even though I am ultra busy testing Testuff 1.0, that’s coming out very very soon, I decided to take some time out and to conclude this crazy series of posts.

We’ve seen why automated testing rocks. As I’ve stated before, it’s more accurate, work faster, harder, for a longer period of time, for less money, with no complaints and no quitting. We’ve also seen why human manual testing rocks. Humans are self maintaining, adaptive to the environment, creative, recognize objects better than machines, have built-in natural language processing, and also excellent learning abilities.

So what is the summary of it all? Fire all humans and replace them with automated testing machines? Throw all automation out the window and hire some testers for cheap from India? No!

The world doesn’t actually divide into black and white, but we quite often mistakenly think it does (a bug in our brains? The misguiding of Western society? Both? None? who knows). We don’t have to be crazy like that Israeli company who fired all testers in favor of automation, though who knows, maybe for their needs of completely repetitive well-known testing it was the right move. We also don’t have to reject any kind of automated testing at our company and stick to flesh and blood testers only. The answer is that we can enjoy both worlds, the shades of gray in between the black and the white. 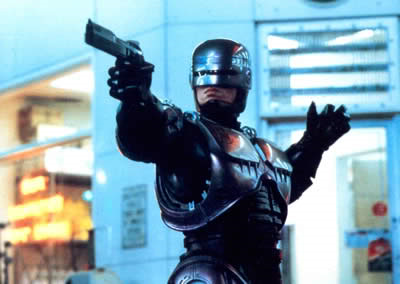 Be a cyborg. Part man, part machine, it has all the advantages that humans do, but some off the hook technological enhancements that allow it to have beyond human capabilities. To take the analogy back, this means that we enjoy the best of both worlds – the automated testing world and the manual testing world and use them both to our advantage:

If you still don’t believe me that you should become a cyborg, watch the trailer for Robocop and see how cyborgs improve law enforcement in crime filled future Detroit. No man and no machine would do to clean Detroit of its thugs, but only a man machine combination that is Robocop:

Have you, perchance, been reading these?